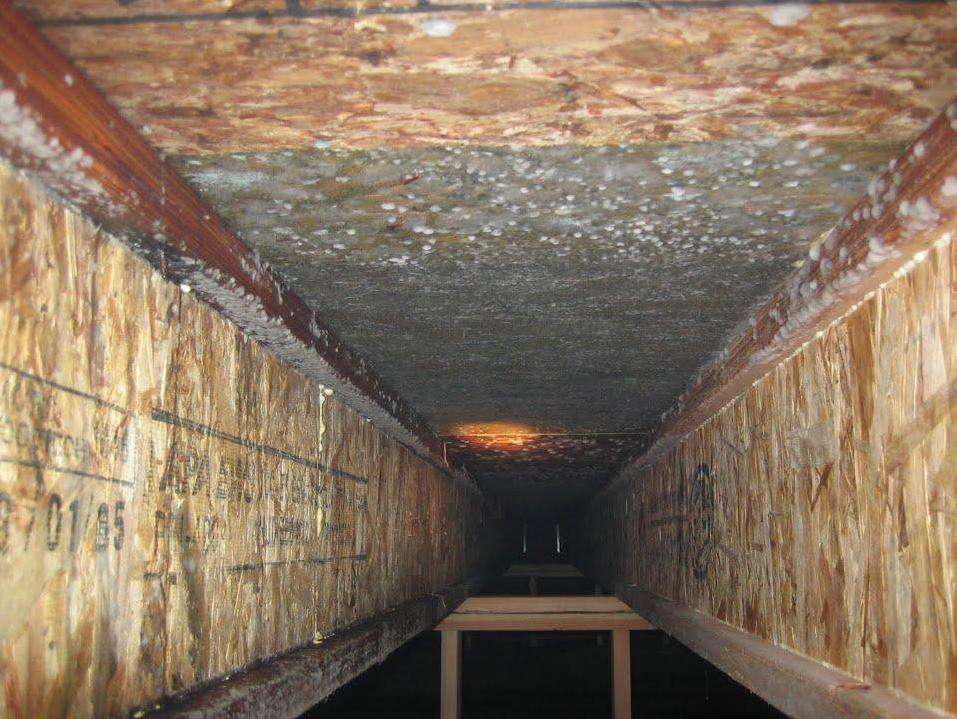 By Pure Maintenance of Santa Barbara and San Luis Obispo CountiesDecember 3, 2020No Comments

We often encounter homes with an elevated “mold load”. (Remember that term! It is becoming more and more popular in naturopathic circles). “Mold load” is defined as the cumulative effect of mold throughout the home, accounting for unseen, seemingly insignificant amounts, as well as significant amounts of mold.

“Mold load” accounts for the overall condition of a home, speaking to such variables as mold toxins, mold spores, and mold growth. It is a way of expressing that a home’s health must be looked at as a complete unit and not separated into sections based on where mold is visible and where it isn’t. It can be challenging to quantify what defines a dangerous mold load. Still, anytime a family member is suffering ill effects from mold in the home, it is typically a space with an elevated and unhealthy “mold load.”

We often find crawl spaces in homes that have a large mold load. The cumulative effect of a moldy crawl space, combined with other seemingly small mold issues throughout your home, becomes a real issue for mold-sensitive people.

The problem with crawl spaces

The use of crawl spaces in construction creates a less expensive way to build a house because contractors can place many electrical, heating, air conditioning, and furnace components under the home instead of within it. While this adds convenience for the builder, crawl spaces are prone to moisture and mold growth. Even building techniques considered to be the industry standard at the time of construction will usually have ventilation issues, moisture issues, groundwater issues, and associated microbial growth. In my 15 years of experience in the mold remediation industry, I have often said, “show me a crawl space, and I will show you some mold.” It is really that prevalent.

The reason for mold growth in crawl spaces is not as complicated as one might think. All structures teeter on the edge of having a mold infestation. We are always within just a few degrees, a few humidity points, or a fresh air allotment (or a lack thereof) of encouraging mold to grow. It is widely accepted that mold will grow on a surface within an environment of 60 percent humidity or more.

Along with this, we are constantly on the edge of “dew point.” In other words, when the combination of surface temperatures and humidity align, the water in the air will condense on the cold surfaces (this is why we have dew on the grass in the mornings!). Once moisture is present, it is only a matter of time before mold will begin to thrive, especially if the moisture issue is not corrected.

Ventilation codes are about the same for crawl spaces as they are for attics. Depending on local ordinances, you are typically required to have one square foot of ventilation for every 150 square feet of underfloor space. So a home with a 2000 square foot footprint would need to have the equivalent of thirteen square feet of ventilation. How that space is divided varies from structure to structure.

Vapor barriers and other problems

There are also exceptions with which ventilation requirements may be significantly fewer or non-existent. These include using a vapor barrier to seal up the floor and some of the wall. (I’ve never been able to wrap my brain around the thought process that installing a vapor barrier, which will often trap moisture, eliminates the need for ventilation). All of this is to say that no matter the variables, the overarching problem remains the same: Crawlspaces are a perfect breeding ground for unseen mold.

In my experience, ventilation is the most critical variable in reducing the mold load within a crawl space. I am sure that every climate is unique in determining the best way to design a crawl space. However, in many cases, I can see that the “vapor barrier” actually exacerbated the problem, particularly if the homeowner noticed mold getting out of control and tried to add a vapor barrier to stop the growth. When this happens, the crawl space now has an elevated mold load, and the plastic barrier traps moisture and mold underneath.

The best time to address mold in a crawl space is during construction. Hopefully, the lumber used to build the crawl space is free of mold was not exposed to water. The next factor is the overall moisture. Hopefully, the home was “dried in” with a roof before winter or rain set in. If you can keep the mold load and moisture levels low during construction, you have a fighting chance of keeping the home’s overall mold load low as well.

After moving in, if either or both get out of balance, mold will become an issue. Mold can present serious health issues, especially when the crawl space houses the furnace and HVAC ductwork. No ducting is airtight, so it will pull mold, spores, and toxins from the crawlspace through the HVAC system and deliver it throughout the home. I have heard very sad stories of homeowners spending thousands of dollars in an attempt to remediate the issue, with very little or no relief.

Thankfully, the Pure Maintenance 2-step dry fog system can return a crawl space and the home to a low mold load. The first step is called InstaPure, in which a peracetic acid dry fog fills the entire volume of the space. All mold and mold spores, along with any bacterial load, will be completely denatured.

In the second step, called EverPure, the technician will apply a dry fog solution widely used as an antimicrobial product in manufacturing industries. The EverPure dry fog will coat every surface in your crawl space with trillions of tiny carbon spikes with a positive electrical charge. No poisons, no heavy metals, no triclosan’s, no phenols, no bleach is involved.

These tiny spikes create a covalent bond with every surface in the crawl space, making the crawl space very inhospitable to mold in the future. Mold spores will not have the luxury of bouncing around within the space in hopes of finding moisture. As soon as a spore touches an electrically charged spike, it is effectively torn apart.

The cycle of mold finding moisture, sporing, and those spores finding moisture and sporing, and having this cycle repeat over and over again will not occur. The process (with the support of added ventilation, if needed) is simple and, more importantly, a fresh start to a healthy home.

Protect your home and possessions from invasive, damaging mold.

Protect your home and possessions from invasive, damaging mold.

ABOUT US
We have been in business for 27 years and are a
woman-owned certified small business.
We serve the local Santa Barbara, Goleta & Carpinteria areas as well as Santa Ynez Valley.

We’re proud to be an accredited business with the Better Business Bureau.

Master Clean USA is proud to be the licensee and provider of the Pure Maintenance process
for Santa Barbara and San Luis Obispo Counties.
© 2021 master clean usa. All Rights Reserved. Cal. License No. 1004497 | Privacy Policy